I must admit that I’m now out of answers. I’ve concluded that the only possible explanation for United’s tendency to choke at the sight of the sides above them is that the entire playing staff and Jose Mourinho have bet their houses and wages for the next decade on finishing sixth this season. What else could it be? Bournemouth dragged their weary, disintegrating Premier League season north to Old Trafford having won one and lost seven of their previous ten games in the competition, a club in free fall, unable to stem a torrent of goals being conceded. Eddie Howe’s approach with the resources he has is commendable, but playing as they have been relegation was becoming a real possibility. If Saturday’s performance is anything to go by it still is.

Bournemouth didn’t even play well. They didn’t have to. Mourinho’s team had a week off for the first time in a while and were given two days rest at the beginning of the week, so a lethargic performance could not be excused. Unlike the League Cup Final the team were well rested and had ample time to prepare tactically. The manager took the opportunity to reintegrate Luke Shaw, hopefully having come to the realisation that if Rojo or Darmian are the answer, the question is “do you mind if I punch you repeatedly in the face?” Which is rather analogous to United’s home form this season as well. With Henrikh Mkhitaryan still out, thus leaving us bereft of joy in our hearts, Wayne Rooney was drafted in to play just behind Zlatan. Jose really was very confident indeed. Also back was the mythical Jones/Rojo axis, so unexpectedly, well, competent, earlier in the season. With Eric Bailly suspended for the visit to Russia to play Rostov and with Jones perpetually returning from injury, perhaps the intention was to give the partnership game time before Thursday. I wish he hadn’t.

United did what United do first half and battered the visitors. And couldn’t shoot for shit. It was comical if it weren’t so fucking disheartening to watch. Still, someone would accidentally not miss in the end. Hilariously that person was Marcos Rojo. Perhaps his English is still so bad that he doesn’t understand about the bet. He angled home a shot-cum-cross in a Falcao stylee and that was surely that. Bournemouth would cave. And in truth they did cave, but so woeful was the finishing that a now strolling around United could have few complaints when Howe’s remarkably open team equalised. Phil Jones was having a bad day. It turns out that his previous excellent form wasn’t a result of his papier-mâché body being extensively reconstructed into a footballing cyborg, but merely a quirk of the wonderfully unpredictable creation that is mankind. Shit, even Paddy McNair looked like a decent centre back once. It’s the reason Dave the Dunce took him away for real money.

Anyway, Marc Pugh cleverly turned Jones in the area and the big, brainless Bambi tripped him for the most obvious penalty conceded at Old Trafford for some time. Josh King converted, for his second decisive goal against United and we were all level. Is that how the first half ended, I hear you cry? No, no it is not. Poor innocent you. It is at this point that the current standard of refereeing in the Premier League once more reared its ugly head. Eww it’s ugly. First Kevin Friend failed to send off Tyrone Mings for STAMPING ON ZLATAN’S HEAD. STAMPING ON HIS HEAD. A HEAD. WITH HIS STUDDED BOOT. Then he failed to send off Zlatan for his perfectly understandable decision to try to remove Mings’ teeth with his elbow. In the resulting confusion Andrew Surman was booked for dissent. It was only when Luke Shaw pointed it out that Friend realised that that was the player’s second yellow card and sent him off. And breathe. Still, United faced forty-five minutes against the ten men of a team who can’t defend with eleven. Simples.

It is here that things got really surreal. Ideally against ten men a team will try to make the pitch big, spread the play, make them run, draw players out of position to tire them and exploit the spaces. Did United do that? Oh no. Instead they started twatting aimless long balls in the vague direction of Zlatan. I’d like to say that they missed a hat-load of chances. At least then I could attribute some level of competence to the second half display. But they didn’t. Indeed, apart from Zlatan’s feeble penalty United didn’t create a clear-cut chance, AGAINST TEN MEN. Disappointed by his team’s impotence, or perhaps wanting to preserve the bet, Jose made a triple change, which included bringing on Marouane Fellaini. Given that the tactic appeared to be long balls, this made sense. Until we realised that the Belgian was going to be playing as a holding midfield player. I. Don’t. Understand.

United were awarded the penalty for handball and Ibrahimovic stepped up to ineffectually side-foot the ball towards the same corner he has put all of his United penalties to date. If you go low and slow it looks great if you score but the keeper has a 50/50 chance of making a save. If you put all of your penalties in the same place and go low and slow and the goalie knows that you have zero chance of scoring. Zlatan opted for the 0% option and the chance and three points were gone. Josh King, on the other hand, went high and hard and David Gea hadn’t no chance, even when diving the right way. 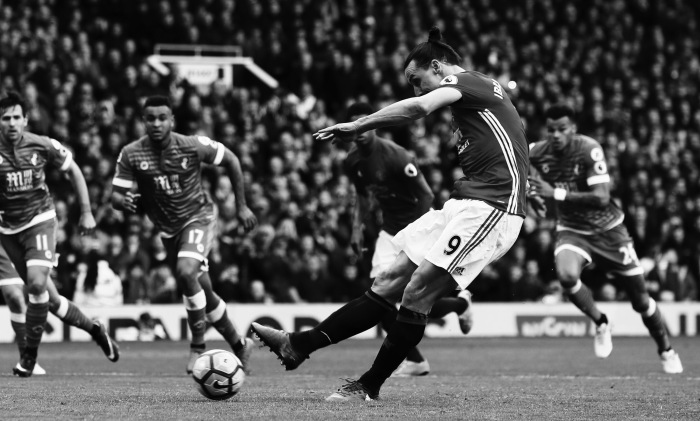 United have relied enormously on Ibrahimovic and Pogba this season. Both were desperately poor on Saturday. The Frenchman did that thing he does when the team are struggling, which is too try to hard to make things happen, rushing everything he does and almost invariably his game falls apart. For all of the music videos and brash exterior, the weight of his transfer fee and the responsibility he believes it brings clearly impact on his game at times. When Zlatan is struggling his finishing can be truly shocking. Unfortunately this was one of those days. He must have gone very heavy on the bet. The biggest issue that United have is a reliance on his goals and the inability of others to chip in sufficiently to reduce that burden. The loss of Mkhitaryan has been keenly felt. Fortunately he is back in training and may play in Russia.

And thus United blew it. Again. What’s more, there is every chance that Zlatan will receive a three match ban if his elbow is reviewed by the referee. The Swede, when asked about the incident, suggested that Mings ran into his elbow. BANTER. Mourinho was a frustrated figure post-match but, with a straight face, attempted to explain away the penalty miss by suggesting that the players no longer practice them since none are ever awarded. Their football is inconsistent, but United have a remarkably strong fairytale game. Bravo. Zlatan may prove difficult to temporarily replace, but those who yearn for a run of games for Marcus Rashford at centre forward may get their wish. The youngster might not have the physical presence of his teammate, but he would add pace and, one suspects, more consistent finishing. The Swede has, according to Opta, missed 17 ‘big chances’ this season in the Premier League. The next biggest culprit behind him in the whole division has missed 9. Zlatan has also been caught offside more than any other player in the league. With so many games to play his absence may not be a bad thing for his own personal form. At 35 he’s played almost every match this season and it is bound to take its toll. The over-reliance on key players has meant that guys like Pogba have been picked for the vast majority of games and it shows. The problem Mourinho has is that his squad is not deep enough to rotate sufficiently. Ander Herrera was replaced by Michael Carrick on Saturday and United immediately missed his industry and guile. Playing Pogba in a two man midfield also limits his contribution.

It is two weeks until United play again in the Premier League, at Middlesborough, so Mourinho can focus on winning over two legs against Rostov and at Chelsea in the FA Cup. Then it’s back to the grind of finishing sixth in the Premier League and the players and staff becoming rich beyond their wildest dreams. Viva the bet.