Our man Richard Cann has brought his regular feature ‘The Week at United’ to our blog! If you’re not already following him, you can do so here.

Wayne Rooney has had to overcome many challenges in his life. The first, David Seaman, didn’t phase him, and so after entering the fray for his debut as a 16 year old against the mighty Arsenal he thunder-twatted a 25-yard winner into the top corner. Simples. Having established his position in the Everton first team after a string of magnificent performances and goals, Rooney was a tabloid victim for the first time, being outed as having visited a brothel on Merseyside where he reportedly, “had sex with a forty-eight year old grandmother in a rubber catsuit and a mother-of-six dressed as a cowgirl.” The then eighteen year old was said to have, “brazenly signed autographs for other punters at the vice den while waiting his turn”. Colleen was said to have been ‘devastated’. Wayne took it like a man banged to rights though, admitted his folly and got the hell out of Everton as soon as his short little legs would carry him, rocking up at Manchester United for over £27m and escaping the relentless ripping he’d have faced in his boyhood club’s changing room. Cunning.

Rooney then faced the pressure of being a child prodigy at one of the biggest clubs in the world, whilst also dealing with being touted as one of the greatest English talents of all time. He went to Euro 2004 and excelled before nonchalantly scoring a hat trick on his United debut. At 18. As you do. They were the first of his 250 at the club, where he has won five Premier League titles, an FA Cup, the Champions League and the World Club Cup, becoming a leader of the team, but also accepting a selfless role as a water carrier for Cristiano Ronaldo. He has scored some remarkable, unforgettable and vitally important goals, a big game player for his club, becoming one of its most influential and important ever players.

Rooney overcame another sex scandal, again involving prostitutes, after which Colleen was said to have thrown her wedding ring into a squirrel sanctuary. Wayne is alleged to have jumped in and searched until it was found, and he won back the girl, no doubt with his charisma and sparkling wit. 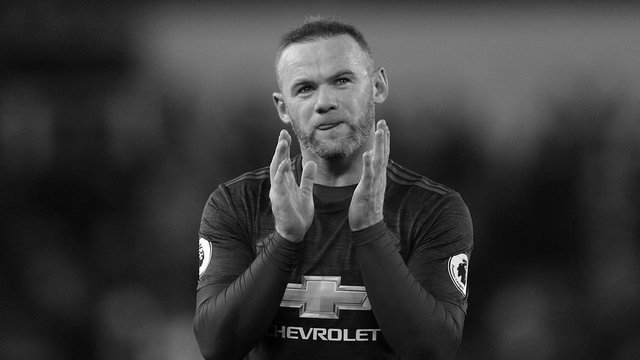 In his mid-twenties Rooney’s physical attributes began to fail him, as did his hair. After facing up to a dressing room in the aftermath of having copulated with someone’s granny, walking in to face Scholes, Giggs and Co with an artificially implanted thatch must have seemed like child’s play. Not so simple will have been facing Sir Alex in 2010 and telling him that he wanted away. As shit-filled balloons go that must have been a heavy one. Rooney supposedly questioned the ambitions of the club under the ginger gnomes (as did we all) and flirted with City. Eventually he relented and signed a huge new contract. A portion of United’s fan base could not forgive him for his treachery, even when the likes of Steven Gerrard and John Terry did the same and faced little criticism. The year before, after three years of playing the club off against Real Madrid and calling himself a ‘slave’, Cristiano Ronaldo got his move to Spain and remained a hero. Weird.

The declining body issue has been more difficult to hide, but remarkably Rooney seemed to do just enough to keep the fans arguing about it for anyone important to notice. Except for Sir Alex, who dropped him for a Champions League game against Real, started playing him in midfield and had a verbal ruck with him. There could be only one winner, you’d have thought. But no, because Fergie retired and Rooney got David Moyes. At first the player didn’t appear chuffed and tried to move to Chelsea, angering more of the fans, but the club refused to sell and Rooney, declining body and all, got a shit-tonne more money. Zing.

Remarkably, he managed to hide that parts of his body were falling off for another three years. Louis Van Gaal even made him undroppable, despite long periods of poor form. Rooney was thus able to slowly edge towards Sir Bobby’s goalscoring record. He must have thought he was the golden child. Roy Hodgson showed no inclination to drop him for England either and he took the record for goals for his country. But, finally, he was found out by Jose Mourinho, a man rarely driven by sentiment and reputation. After one wretched performance too many, at Watford, he was dropped and, cup games and sub appearances aside he has stayed dropped. To his credit he has not complained at all, probably because he knew the writing was on the wall. Still he could not be stopped however, equalling Charlton’s record at home to Reading and then, with United trailing at Stoke last weekend, wanging in a ludicrous free kick in the fourth minute of injury time to make it his own. Just when you think Rooney is done he pulls something from the fire. Some refuse to call him a club legend. I think he probably is and, regardless, will be immortalised in the history books. That goal at the Bet 365 Stadium will have the fans arguing once more about his worth and he will live on, picking up his £300k a week, maniacally cackling. And why not. He earns huge money and makes the back pages of the papers and doesn’t even have to be consistently good at football any more. Next step, a brief move to China to earn a grand for every breath he takes on Asian soil. Wayne Rooney. Winning at life.

United, however, have momentarily (I hope), stopped winning. 17 unbeaten they may be, but two consecutive draws mean that they are no closer to cracking the top four in the Premier League. Profligacy appears to have reinfected their game and despite dominating at Stoke it took Rooney’s late goal to rescue a point. United enjoyed 65% possession and took 25 shots, but could only respond to Mata’s own goal in injury time. With Liverpool losing comically at home to Swansea and City and Spurs drawing all is not lost, but once again Mourinho’s team have failed to take advantage of others’ slip ups. Frustratingly, at the back United have become rather sloppy, which has strangely coincided with Chris Smalling’s return to the team. Hmm.

Morgan Schneiderlin and Memphis Depay have finally left for Everton and Lyon respectively. Neither did enough to suggest they are good enough to make it at United long term. The most remarkable thing is that United elicited excellent transfer fees for them, a novel development given Ed Woodward’s history of giving unwanted players away. Mourinho appears to have the club operating at a higher level off the pitch as well as on it. The manager has denied there will be any incoming players, despite the Portuguese press relentlessly linking the club with Benfica players. Between them A Bola and Record produce enough shite to fertilise half of the world’s crops for a year. Donald Trump would, if he could read, approve.

One thought on “The Week at United: Wayne Rooney winning, United drawing.”