Social media is rarely the first port of call for someone looking for quiet reflection or a measured response to an event of any kind, but after Manchester United’s 0-0 draw with Burnley on Saturday, a brief scroll through the Twitter timeline could have left you feeling that the world was coming to an end. Indeed, so furious were large sections of United’s fanbase that, had they taken to the streets, it could well have looked like an apocalyptic scene from a film, people tearing at their hair and howling at the moon as they ripped their replica shirts and descended on Old Trafford with pitch-forks and burning torches.

Such frustration was understandable, to a point. After all, that result left United languishing in eighth place, eight points adrift from the Premier League summit and seven from the bosom of the top four. It brought to a close a month during which United’s points tally and goals-for column were utterly wretched and which included a mortifying 4-0 defeat to Chelsea.

Still, while none of that looks – or feels – good, it is perhaps worth remembering that, aside from the Chelsea game, United have actually played pretty well of late and, had Zlatan Ibrahimovic not suddenly forgotten how to score goals, things would look – and feel – very different.

For some of us, however, things already do feel very different, at least in relation to the last three years. There were many times during the Louis van Gaal era when it was a struggle to stay awake as you watched United from the stands and, during these early days of the Jose Mourinho experiment, there are signs of a revival of United’s traditional attacking flare. Against Burnley, far from feeling your eyes growing heavy, you could not take them off the game as United launched wave after wave of attacks, pummelling the visitors and penning them back.

Yes, it was only Burnley, but some of the team’s play was breathtaking, with Paul Pogba and Juan Mata particularly impressive. The former has had a relatively quiet start to his second stint at the club, reduced to glimpses of his wonderful ability. On Saturday, however, he pulled the strings, especially during the second half, when United began to beat on Burnley’s door.

It was a brilliant, hugely entertaining match that, on another day, would have seen United run up a cricket score, and wasn’t one of the biggest criticisms of Van Gaal – and David Moyes before him – that United’s style of football was not befitting a club of United’s history of attacking football? It would appear that people have short memories. Sixty-one shots in two home games would have been unthinkable under Van Gaal and United were thwarted by inspired goalkeepers and rut-dwelling strikers even under Sir Alex Ferguson. If they keep on creating this number of chances, the goals, you feel, will eventually come. 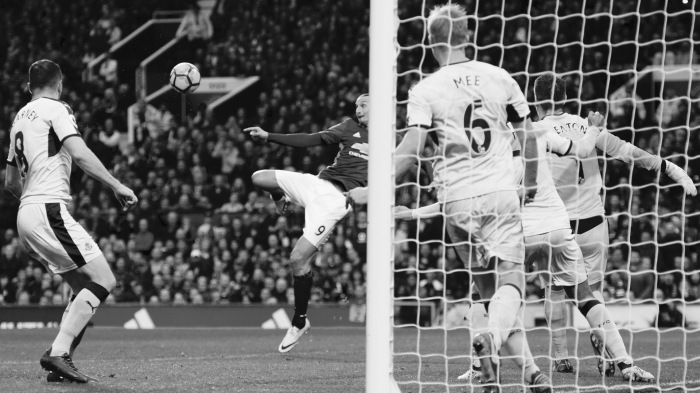 Ibrahimovic took most of the flak on Twitter after the draw against Burnley. Unsurprising, really, given his abysmal finishing during October, yet while wishing death on the Swede may momentarily make people feel better and get them a few retweets, it probably isn’t all that constructive and ignores the fact that he is at least getting into positions from which you would ordinarily expect him to score. Such a prolific striker surely cannot continue to miss such gilt-edged chances and Ibrahimovic’s all-round play has improved since that mauling at Stamford Bridge.

Nevertheless, there are calls for him to be dropped and it feels like a couple of weeks out of the spotlight might do the player good. Ibrahimovic’s continued inclusion as the focal point of United’s attack also means that Marcus Rashford’s many talents are blunted by being played on the wings. His pace and natural finishing feel like weapons Mourinho must surely unleash before long.

Mourinho, himself, has made mistakes. His substitutions on Saturday were baffling in the extreme and his mysterious mistrust of Henrikh Mkhitaryan, who many of us were relishing seeing play for the club when he signed in the summer, remains bizarre. Still, he has transformed United from the laborious, mind-numbing outfit of last season already, with many players who appeared racked by self-doubt, back then, beginning to shine. Get the likes of Anthony Martial and Rashford fit and firing again and things could turn around in a heartbeat.

Being eight points off the top at this stage of the season, particularly with all that money spent, is obviously disappointing but United fans should know better than anyone that a gap of that size, so early in a campaign, is hardly insurmountable. Think about some of the gaps the club overhauled under Ferguson, or (though I’m loathe to bring it up) the one Manchester City clawed their way back from during the Scot’s penultimate season.

United are far from the finished article but there are signs of a resurgence, if you are willing to look for them. Social media will continue to be the go-to place of the baying mob but it is far too early to be writing the season off as an unmitigated disaster. The pitchforks may well be needed in the months to come but, for now, a little patience probably wouldn’t go amiss.